It is now October 2017 and I have been writing this blog for nearly 4 years so thought it about time I posted a timeline of events.
On Bank Holiday weekend 1998 the site of the former Pleasurama, listed building that used to be the Ramsgate Sands Railway station mysteriously caught fire. 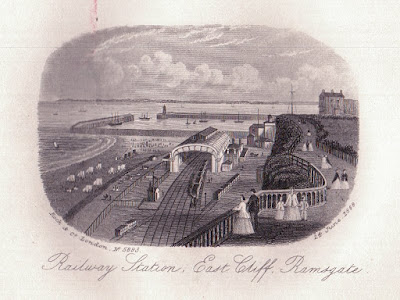 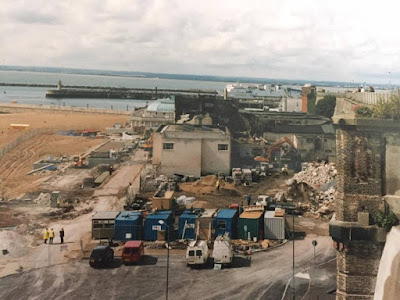 In Summer 2002 after TDC took the site back off James "Jimmy" Godden (He walked away because TDC let him keep the insurance money from the fire in 1998). TDC marketed the site in a document called “The Ramsgate Renaissance Commercial Development Opportunity”.
This document laid out the criteria for any developer to follow should they have wished to bid for the site unfortunately when they (The Labour controlled TDC) chose the developer they ignored the criteria.
What they also did was state quite clearly at the outset the sale would be on a FREEHOLD basis 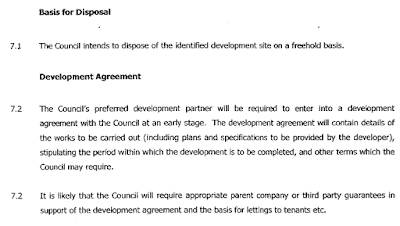 Clearly TDC had no intention of retaining control of the site in perpetuity. In the opinion of the author they only chose an offshore company, controlled by a person they never vetted (they failed to do the basic checks such as driving licence or a utility bill) because SFP Venture Partners offered a larger sum of money for TDC's coffers.
Still Labour lost the local elections in May 2003 and Sandy Ezekiel's Tory party took control surely now something could be sorted? What could possibly go wrong?
In November 2003 SFP applied for planning permission (only took a year) and planning officers, who we all know work as fast as snails, had a chance to look over plans for a site on Ramsgate Seafront which had the potential to forever change the look of the area surely they would do a thorough job?
On January 28th 2004 planning was granted WOW!!!

Fast (Slow) forward to 2006, no building had taken place however as you will see at 7.2 a Development Agreement had to be put in place so in September 2006 a DA was signed by Ezekiel's Tory Cabinet and the renamed SFP Ventures Ltd. Building could start. 3 leases were paid for as part of this agreement at a cost of £550K.

Slow forward to 2009 and plenty of excuses but no building happened. The main excuse was Colin Hill and Sean Keegan couldn't find a bank to underwrite a Bond for £5.6M and finance for building was difficult to obtain. Interesting however at the same time Colin Hill appears on the Forbes rich list with a personal fortune of £300M.

So in August 2009 the DA was amended to a surety of £1M and an extension to the agreement to Feb 2014. Cardy were appointed by SFP to build and they confirmed to TDC they were prepared to contribute £1.5M 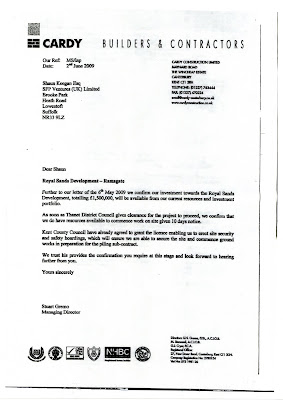 It does seem that Cardy paid for the work done on the site however when this ran out work stopped and hasn't ever recommenced despite many promises.

At the end of 2012 after the Tories lost control of the Council rumours started circulating that the new Labour controlled Cabinet were planning to sell the freehold to Colin Hill (At this time no one knew that Labour had originally marketed the site with the freehold the prize) So a group of locals banded together to try and stop this sale. This group called themselves the steering group and it later became Friends of Ramsgate Seafront. This group comprised the author, Terry Askew, Nick Cooper, Angie McKenzie, Gerhard Mueller, and Kandy Jones. This group successfully petitioned to stop the sale of the freehold in 2013 and with the termination of the DA on the 28th February 2014 it was assumed this would see the land returned to TDC. How wrong were we!!!!

Unknown to FORS in November 2013 Pinsent Mason were engaged by TDC to provide advice to TDC as to how to take the land back from SFP Ventures (UK) Ltd (Colin Hill and Sean Keegan). In a written report (private and confidential) to TDC the advice said that TDC would stand a good chance of losing any court case. This was discussed here and concluded that due to actions from a sitting Councillor and other legal constraints they would fail at court.

To date no work bar what Cardy (now dissolved) Developments Ltd had done at their expense and still TDC are impotent to terminate. 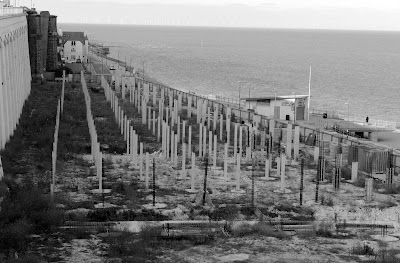